The wild flowers of Varlamos 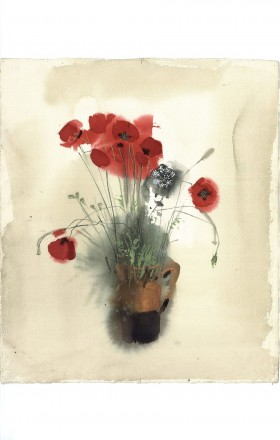 The exhibition The wild flowers of Varlamos, organised by the Central Committee of the Communist Party of Greece, presents the works of the painter-engraver Giorgos Varlamos around wild flowers.
The exhibition includes 120 works (oils, watercolors, drawings, engravings) and is structured in three sections: Wild Flowers, Meteora and a third section with drawings and engravings from the period of the Dictatorship in Greece. Along with Varlamos artistic work, the exhibition presents a small part of his workshop: his engraving tools and personal items, which bring his work and action into life.
G. Varlamos studied painting at the School of Fine Arts, with O. Argyros and K. Parthenis and engraving with G. Kefallinos. He continued his studies with a scholarship in Paris at the Ecole des Beaux-Arts and at the College Technique Estienne, where he specialized in book art and postage stamp engraving.
He was fortunate to be one of the chosen students of Kefallinos, with whom he collaborated in order to create an album on the engraving of ten white attic ampullas from the 5th century BC titled "Ten White Attic Lecithons"
Varlamos passionately served the art of engraving because he considered it a democratic art, as it could be accessible to the workers as original, but not unique. He illustrated and edited a number of publications and was internationally acclaimed for editing books and albums. He collaborated with leading artists, writers and intellectuals.
During the period of the Occupation he joined the Communist Party of Greece and was active in the Resistance. He had lifelong ties with the Communist Party, where he handed over with a handwritten public will his workshop and his works of art. He was nominated a candidate for the  national list of the Communist Party in many election battles. He actively participated in the struggles for the professional recognition of artists.
Duration of exhibition: 15 December 2017 - 15 April 2018
Photographs: Nikos Mylonas