Road of Light and Hope 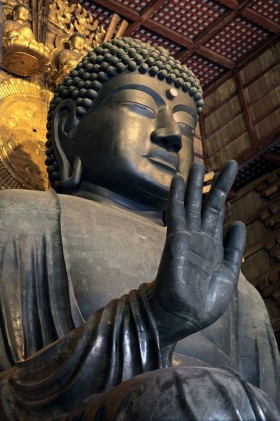 A philosophy shared by East and West: Eternity exists in a moment and the whole world is in a speck of dust.
Thus, if one universe is a part of the bigger one, and if all is one and one is all, we can regard all ourselves as one  from the tiniest atom to the largest universe.
Everyone is a part of everything and all is interconnected: this is the core message of Road of Light and Hope whose ancient Eurasian wisdom arrived in Japan 1300 - 1500 years ago via the Silk Road and even today survives in the form of art.
The Eurasian trail where this all-inclusive vision was fostered, and where beauty and wisdom interacted as a Road of the Vairocana Buddhas introduction to Japan, is an inspiration for oneness of all, transcending East and West, as well as North and South.
The globally touring photo exhibition & short-film series, Road of Light and Hope presents visions towards unity through select artwork as evidence of the interconnectedness of East and West, throughout which The Eurasian Trail of Wisdom stands out in bold relief.
While Nara was the ancient capital of Japan, it was de facto the easternmost  terminal of the Silk Road.
If we were to seek a cultural link connecting its westernmost terminus, Rome, with Nara, it might be found in the sculptural art works from the eighth century, embodying the ideals of the human spirit as well as the free and vivid movements influenced by the classical style of ancient Greece.
Some examples would be: Buddhist statues influenced by Hellenistic culture; the Vairocana Buddha whose origins can be traced along the Silk Road to the ancient Greco-Bactrian Kingdom; Fukūkensaku Kannon which some believe may have a Greek origin via Shiva, one of the principal Indian deities, who is possibly connected to Hercules in Greek mythology; Gigaku masks whose origins go back to the comic mask theatre of ancient Greece, brought all the way to Japan via the Oasis Silk Road, while becoming intermingled with the folklore and dance of Sogdians (middlemen along the trade routes) and various mask theatres along the Silk Routes both by land and sea.
Various hints and inspirations can be found in the histories of exchanges and fusions permeating the Silk Road that linked Europe, Asia and Arabia in one expansive network.
While exploring the forgotten history of countless obscure exchanges between races and religions, philosophies, mythologies, arts and cultures, by examining both the tangible and the intangible cultural heritage surviving in Nara for 14 centuries the artist would like to search for common ground to foster tolerance and solidarity in todays divisive times and fragmented world.
As a cue to inspire such awareness, the goal is to propose the notion of a  Road of Light and Hope as a message from the Silk Road of 20 centuries ago, tracing back from Nara to Rome through art and media, under the motto: The medium is the message (M. McLuhan).
About photo exhibition & short-film series: Road of Light and Hope
The touring photo exhibition & short-film series, Road of Light and Hope began at the United Nations HQ in New York in 2016.
It was followed up by exhibitions at the Academy of Arts in Tashkent, Uzbekistan (the Ikuo Hirayama International Caravanserai of Cultures) at the Council of Europes HQ as well as at le Lieu d Europe in Strasbourg, later that same year.
In 2017 Road of Light and Hope: National Treasures of Todai-ji Temple, Nara was held at the Japan  Foundation, Toronto and the Consulate General of Japan in Chicago, jointly co-organized with Japan Camera Industry Institute and Media Art League.
The most recent venue was the Centro Cultural Correios Rio de Janeiro as part of Japan Month (Mês do Japão: 4th  29th July 2018) in commemoration of the 110-year history of Japanese immigration to Brazil which received approx. 62,000 visitors in 3 1/2 weeks.
The 7th venue is the National Museum of Multi Culture (Museo Nacional de las Culturas del Mundo) in Mexico City (8th Nov. - 3rd Dec. 2018.)
The portrayed treasures are preserved in Nara at the Todai-ji Temple as well as the Kasuga-taisha Shrine which respectively are part of the UNESCO World Cultural Heritage Site: Historic Monuments of Ancient Nara.
These are extremely rare images, as many of the portrayed artifacts have never been photographed during the last 40 years or more.
About Media Art League
MEDIA ART LEAGUE is a media and art centered network linking artists & creators, media-specialists, professionals and cultural, intellectuals, opinion leaders, philanthropists in Japan, Europe and the Americas -- headquartered in Tokyo with a constituent branch in Toronto.
Collaborating with Japanese art foundations and governments as well as academic, international media organizations, etc., it strives to realize, share and exchange art and cultural projects to promote cross-border awareness and understanding.
Official Site: http://mediaartleague.org
About Japan Camera Industry Institute
JAPAN CAMERA INDUTRY INSTITUTE (JCII) is a non-profit organization engaging in research and preservation of photographic industry and cultures of Japan.
It operates a museum and photo galleries with extensive collections of photography equipment as well as invaluable wide variety of photographic films/prints including many original photographs taken around the world from the late 19th century to the present.
Exhibition coordinators
Byzantine & Christian Museum, Embassy of Japan in Greece, Japan Camera Industry Institute, Media Art League
Photography and Texts
Miro Ito / Media A
National Federation of UNESCO Associations in Japan, Nara Visitors Bureau
General Coordination and Supervision
Dr Aikaterini P. Dellaporta
Director
General coordination
Periandros Epitropakis,
Archaeologist
Head of the Department of Exhibitions, Communication & Education
Exhibition curation
Effie Meramveliotaki
Archaeologist
Graphic design
Yannis Stavrinos
Conservators
Athanassios Kavasis, Dimitrios Margaritof
Photographs
Nikos Mylonas
Technical support
Yannis Gonios, Petros Kalofonos, Athanassios Kavasis, Dimitrios Margaritof
Public relations
Katerina Choina
Media Sponsor
KATHIMERINI newspaper