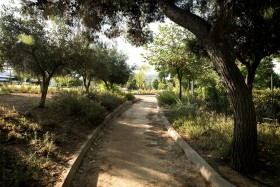 The area of the River Ilissos in ancient times

A major religious centre grew in the valley formed on both sides of the river Ilissos banks, on the eastern side of the Akropolis hill, with sanctuaries dedicated to Zeus, Apollo, Gaea, Kronos and Rea, Artemis, Pan, Acheloos and the Nymphs. The temple of Olympian Zeus (6th-2nd century BC) was prominent among them. As only part of its colonnades has been preserved, it has become known as the columns of Olympian Zeus. Hadrians Gate (131/2 AD) is also included among the monuments in the immediate vicinity.

A large three-aisled Christian Basilica was built on the small Ilissos isle called Vatrachonisi (the Frogs Isle) in the1st half of the 5th century. Only few remains are nowadays preserved. A funerary underground chamber (known as a martyrium) of a presumably older date (4th century?) stands at the outer northern side of the Basilica, bearing traces of murals and marble revetment. During excavations carried out in 1916-1917, parts of the floor mosaics of the Basilica were removed and transferred to the Byzantine Museum and are now on display in its permanent exhibition.

The landscape on the banks of the Ilissos changed dramatically in mid-20th century, when the river was entombed, and Vassileos Konstantinou and Kalirroes Avenues were constructed over the river bed, following its route. Although the landscape was entirely altered because of extensive building activity that had negative effects on the environment, the present-day broader area around the Temple of Zeus (Olympeion) functions as an archaeological park, offering an idea, albeit very fragmentary, of the fluvial landscape of the past.

The building complex of Villa Ilissia was built near the banks of the Ilissos River as the winter residence for Sophie de Marbois-Lebrun (1785-1854), Duchess of Plaisance. The villa, completed by architect Stamatis Kleanthis in 1848, was ceded to the Greek army after the death of the Duchess. Since 1930 it has been used to house the Byzantine and Christian Museum.

A gateway, found in the Museum grounds in 2007, may have originally been the main entrance to the building complex on Vasilissis Sophias Ave. Similar pillars were used to decorate entrances of Athenian mansions in the early 20th century.