Byzantine and Christian Museum :: Permanent exhibition .::. I. From the ancient world to Byzantium

I. From the ancient world to Byzantium 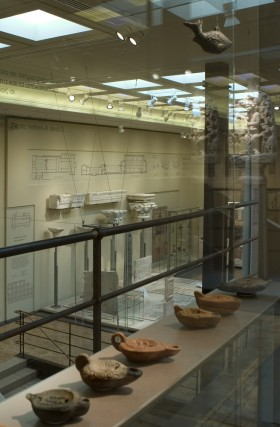 The transition from the ancient world to the Byzantine was gradual. The political, economic and religious structures of the ancient world began to break down from the end of the second century, a time when Christianity was starting to gain ground and the first examples of Christian art appeared. A milestone in this transition was the legalization of the Christian religion in 313 by the emperor Constantine the Great. Christian art now acquired a public character and was put to work in the further propagation of the new faith. In parallel, the transfer of the capital of the Roman Empire from Rome to Constantinople in 330 represented a decisive shift in the empire' s center of gravity from the Latin West to the Hellenized East. The division into a western and eastern empire in 395 and the dissolution of the western half in 476 were significant stages along the way to the end of antiquity, which can be said to have breathed its last with the closure of the philosophical schools in 529, the onset of the barbarian invasions, and the decline of the great urban centers after the sixth century.