Ι.3. The temples of the new religion 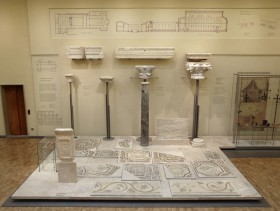 After the formal recognition of Christianity by the Emperor, the need arose for an architectural and artistic form of expression that could embody the triumph of the new religion, while glorifying God and honoring the martyrs and confessors of the faith. From the first half of the fourth century magnificent churches began to appear, often imperial foundations. The predominant architectural form for churches at this time was the basilica, inspired by the type of Roman assembly hall known by that name. As a rule, it was a rectangular hall divided lengthwise by rows of columns into three or more aisles. It usually had a wooden roof. The hall was lavishly decorated with sculptures and paintings. The entrance was from the west, where one first encountered a transverse vestibule called the narthex. The eastern end was marked by the apse of the sanctuary. A courtyard surrounded by a covered colonnade, known as an atrium, as well as annexes built to serve particular liturgical purposes spread out around the church. The basilica could accommodate the cultic requirements of the new religion, and at the same time provided a suitable space for large congregations.