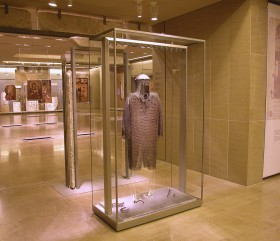 The end of the dynasty founded by Emperor Justinian (6th c. AD) in effect marked the end of antiquity, and signaled the beginning of medieval Byzantine society. Slav and Arab incursions and the Iconoclastic Controversy led to a loss of territories, although this contributed to the Empires homogeneity, since it now embraced primarily Greek-speaking populations.

The structure of Byzantine society rested on three main foundations: a flexible but powerful administration, headed by the Emperor; the Christian religion, with the Patriarch at the head of the Church; and the Greco-Roman tradition and Greek language. All three left their mark on both the daily life of the Empire and its cultural and artistic modes of expression.

The sack of Constantinople by the Frankish and Latin crusaders in 1204 delivered a crippling blow to the Empire, but also led to new relations and channels of contact. Despite their persistent efforts, the Palaiologan emperors could do nothing to halt the political decline of the Empire following their restoration to the Byzantine throne in Constantinople in 1261. Nonetheless, the Palaiologian revival in the arts and letters was a vitally important cultural event that was to have a stimulating effect on both East and West.