ΙΙ.6. Franks and Latins in Byzantium 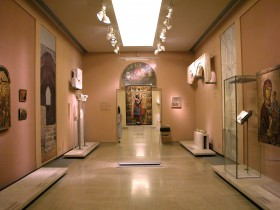 From the end of the eleventh century until and including the early thirteenth, Christians in the West proclaimed four crusades with the goal of liberating the Holy Land, above all Jerusalem, from Muslim rule. The Fourth Crusade, however, was diverted from its original purpose and resulted in the capture and sack of Constantinople in 1204 and the creation of Frankish and Latin principalities in parts of the Byzantine Empire. Painting and sculptural works by western artists have survived from this period, as well as monuments built according to western architectural principles, such as fortifications, private and public buildings, and churches and monasteries founded by western monastic orders. At the same time, the Byzantine artistic tradition came into contact with the western, whose influence was absorbed into elements of Byzantine art, creating a style characterized as Franco-Byzantine.