ΙΙ.8. The Palaiologan period: The final flowering of Byzantium 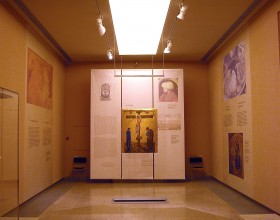 In 1261, the liberation of Constantinople from Latin occupation by Michael VIII led the Palaiologan dynasty to the throne of a now highly fragmented Byzantine Empire. The most long-lived of all Byzantine dynasties, the Palaiologans clung to power until the empires final dissolution in 1453, with the fall of Constantinople to the Ottomans. Despite political and religious controversies and continuous external threats, the Palaiologans love of classical learning gave new impetus to the development of philosophy, science, literature and the arts. Constantinople regained its leading position as an artistic and intellectual center, while Thessaloniki too played a dynamic role and its influence stretched deep into the Balkan peninsula. After the fourteenth century, Mistra became the home to many scholars, transforming it into the last preserve of Byzantine intellectual and artistic production.

Now drained of wealth, glory and power, the Byzantine Empire in its last period reaches its artistic zenith, especially in painting. Saturated in the classical tradition, this great artistic culmination went on to serve as the foundation for yet another glorious phase, in post-Byzantine painting.