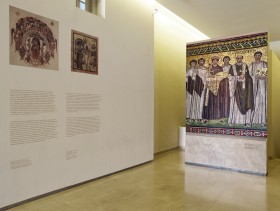 Byzantium or Byzantine Empire was the name given in the 16th c. to describe the Roman Empire from the fourth century onwards. It was a multinational and, at least at the beginning, a multireligious state, which had a decisive effect on the fortunes of the Ancient and Medieval world from the 4th century until 1453, when it was abolished by the Ottoman Turks. From the 3rd century but mainly after the capital was transferred from Rome to Constantinople, in 330, the Empire began progressively to change territorially and administratively and to mutate. The new capital, characterized as the New Rome, "the Queen of all the cities", was actually the city named Byzantium, the ancient colony of the Greek city of Megara at the coast of Bosporos. This city was renovated, adorned and renamed by the Emperor Constantine the Great. Constantinople was to become the main centre of culture for all the Medieval world.

Until the fifth century the Empire extended in the three continents round Mediterranean Sea, in Europe, Asia and Africa. In late fifth century however, when Rome and Empires Western part were occupied by German tribes, it was limited in the Eastern lands of its old territory. Since then, its borders continuously changed. In the sixth century it was a vast, multinational and still multireligious state. In eleventh and twelfth centuries, still multinational, it extended over the Hellenic, Aegean and Asia Minor territories. In the thirteenth century, in 1204, its ceased to exist, after being abolished by the Crusaders of the Fourth Crusade, and was substituted by small states, in Bithynia (Nicaea), Epiros and Pontos (Trebizond). After its reconstitution, in August 1261, and mainly during the next two centuries, fourteenth and fifteenth, it extended only over some Greek lands round Constantinople.

Byzantium was by no means immutable; it was characterized by endless changes in its structures, its function, its character. The barbaric raids (2nd-6th c.), the expansion of the Arabs (7th c.), the epidemic plague, the climatic changes and other factors were leaving their traces on its citizens, its administration, its culture.
From the fourth to the sixth century Byzantium was Roman, mainly pagan, using the Latin language. As a result of the progressive changes after the establishment of Christianity (381), the loss of the lands (5th-7th c.) and the Iconoclasm (8th-9th c.), only few Roman characteristics  survived in the 9th century. At the time the State was land-limited and multinational but Christian, and it had its own original culture; the language in use was Greek. The administrative structure and the economy changed. The enormous provinces of the fourth century disappeared, the urban framework collapsed and was substituted by fortified settlements. Byzantium was ruralized and remained mainly rural in the years of prosperity (10th, 12th c.) and up to 1204. Only the emperorship remained immutable in time. It was shaped in the early centuries by incorporating the spirit of Christianity into the Hellenistic and Roman political ideas about kingship. The emperor, surrounded by a strictly structured government and ecclesiastical hierarchy, acted as an oecumenical leader of the unique oecumenical Empire, as the representative of God in earth, who looks after the citizens of the whole world and leads them to the real faith.