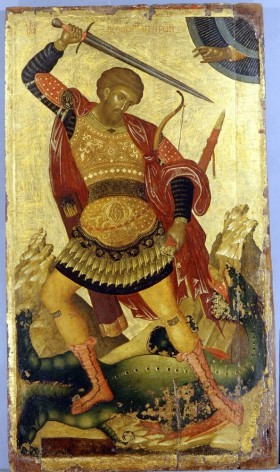 The Collection of Dionysios P. Loverdos (1878-1934), a banker from Kephalonia, is one of the biggest and most important collections of Post-Byzantine religious art in Greece.  The basis of the collection is formed by works from the collection of the philologist Alexios Kolyvas (1848-1915), which Loverdos bought after the latter's death and which he then added to and housed in his splendid residence at 6 Mavromichali St., Athens.

In 1979 the Byzantine and Christian Museum undertook to conserve and keep a large part of the collection at the request of Loverdos's duaghters.  Acting as executrix on behalf of her father's other heirs, Ioanna Loverdou-Vasileiadi saw to the transfer of the collection.  The Museum received 470 icons, some woodcarvings, among which was a complete iconostasis from a church, 169 manuscripts, a few works of the minor arts and some textiles. Most of these works were conserved in the Museum's laboratories and were displayed in temporary exhibitions.  A number of them are on display in the new permanent exhibition in the Byzantine Museum, while the greater part of this precious collection, currently kept in the Museum's store-rooms, is gong to be re-exhibited at some future date in the Ziller-Loverdos Building on Mavromichali Street, which, once it has been restored, will become an annexe of the Byzantine and Christian Museum.  The icons are remarkable examples of Cretan and Ionian painting between the fifteenth and the twentieth centuries and a number of them are the works of well-known artists. They testify to the survival of Byzantine art in the centuries after the Fall of Constantinople and show the creativity of religious painting in this period.  They are of special interest not just because they are outstanding works of art, but also because they show the collector's personal taste for Post-Byzantine painting and above all for icons from the Ionian Islands, which was, of course, where he himself came from.  Compositions following the Byzantine tradition but above all new iconographic types and subjects inspired by Western iconography emphasize the special significance of this collection, which gives the visitor the opportunity to broaden her/his knowledge of Post-Byzantine art.