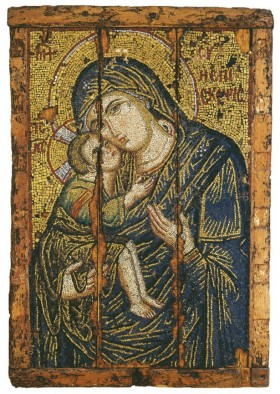 The original collection, which began with the icons belonging to the Christian Archaeological Society (XAE), was gradually built up with artefacts from the Refugees' Heirlooms, which arrived in Greece after the Asia Minor Disaster of 1922 and the exchange of populations in 1923.  Since then the collection is constantly being added to through gifts, bequests, confiscations and purchases.

The collection of Byzantine icons (9th-15th c.) is small but particularly important, containing some outstanding examples of middle Byzantine and Palaiologan painting.  The oldest is the two-sided icon with the Crucifixion on its main face, made up of three paint layers (9th-13th c), and a Virgin Hodegitria (16th c.) on the reverse from the Evangelistria Monastery in the municipality of Peta, near Thebes. Also worthy of note are the icon of the Virgin Glykophilousa (12th c.), the two-sided icon with the figure of St George in relief on the obverse (13th c.) and the large-scale mosaic icon with the Virgin and Child (14th c.) from Triglia in Bithynia, which comes from the Refugees' Heirlooms collection.

There are a large number of Post-Byzantine icons which testify to the continuity of religious painting from the fifteenth to the nineteenth century in the Orthodox world, above all in Crete (15th-17th c.) and the Ionian Islands (17th-18th c.).  From Venetian-occupied Crete the collection has works by the painters Angelos, Michael Damaskinos, Thomas Bathas, Emmanuel Lambardos and Viktor; as well as by Emmanuel Tzanes, Philotheos Skoufos, Theodore/Theodoros Poulakis and Elias Moskos, who all left Crete after its conquest by the Turks in 1669 and settled in the Ionian Islands.  It also contains works by Ionian painters of the seventeenth and eighteenth century, such as Andreas Karandinos, Constantine/Konstantinos Kondarinis, Nikolaos Kalergis, Demetrios Nomikos, Leon Leichoudis, Panagiotis Doxaras and Nikolaos Kandounis.

Of equal importance are the icons from workshops based on the Greek mainland and in Asia Minor with a different artistic style, dating from the sixteenth century onward.

Finally there are 300 triptychs, some diptychs and a polyptych in the collection, dating from the fifteenth to the nineteenth century. These artefacts were for the most part works of private devotion, as can be seen from their small scale

Some woodcarvings, such as three carved wooden sanctuary barriers [or templons] from churches in the Ionian Islands and Northern Greece, two episcopal thrones, some sanctuary doors, etc. complete the collection.