Painted panel with the sacrament of Confession (01322) 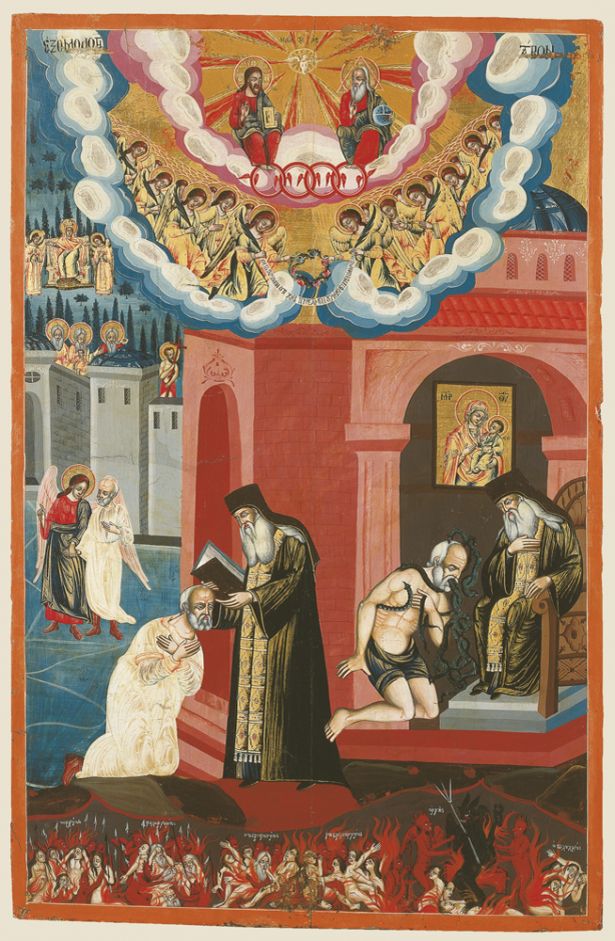 The panel is inscribed "ΕΞΟΜΟΛΟΓΗΤΑΡΙΟΝ" [Confessional Guide].  Its aim is to the show the value of the sacrament of confession, brandishing the threat of punishment (Hell scene in the lower part) and at the same time promoting the expectation of reward (Paradise scene at upper right).  The words of Christ "I say unto you that  ... joy shall be in heaven over one sinner that repenteth", which is inscribed on the scroll which the angels are holding unfurled, is taken from the parable of the lost sheep (Luke 15, 7).

This subject is depicted in another two pictures in the Byzantine Museum, one of which is attributed to Agapios Prokos, a painter from Siphnos.  In all three works the iconography is basically the same. Its geographical origins must be sought not just in Asia Minor, from where at least two of the three works certainly come, but probably in Constantinople itself.

The panel was painted in egg tempera. It has the characteristics of an icon, but, despite depicting sacred figures, it cannot be considered a devotional object. The same difficulty is encountered as regards other scenes in this period.  They have all been painted by icon painters, whose basic artistic training consisted of creating icons, destined to serve as devotional objects. These particular scenes, however, have a more moralizing and didactic character.

Didactic subjects of this type are known in the iconography of the West from the 15th century on.  In Orthodox iconography at least one example of such a theme, relating to the charity to be shown to the poor, survives from the 16th century. However, on the specific subject of confession there does not seem to be any earlier example before the 18th century.  This naturally means that at that time the Orthodox Church was seeing part of its flock neglecting to participate in this crucial sacrament and, possibly, distancing itself from church life in general.  This subject therefore was meant to remind those 'neglectful' members of the congregation that it was the Church, through its rites, which held the keys to Paradise.  From as early as the 16th century the Orthodox Church, and especially the Patriarchate of Jerusalem, was issuing certificates of forgiveness of sins to the faithful ("indulgences"). Most of these certificates date to the 18th and 19th centuries.  In the same category of didactic and moralizing exhortations, by means of which the Orthodox Church tried to keep its flock together, a series of manuscripts, containing parables and other morally improving texts, should be included.