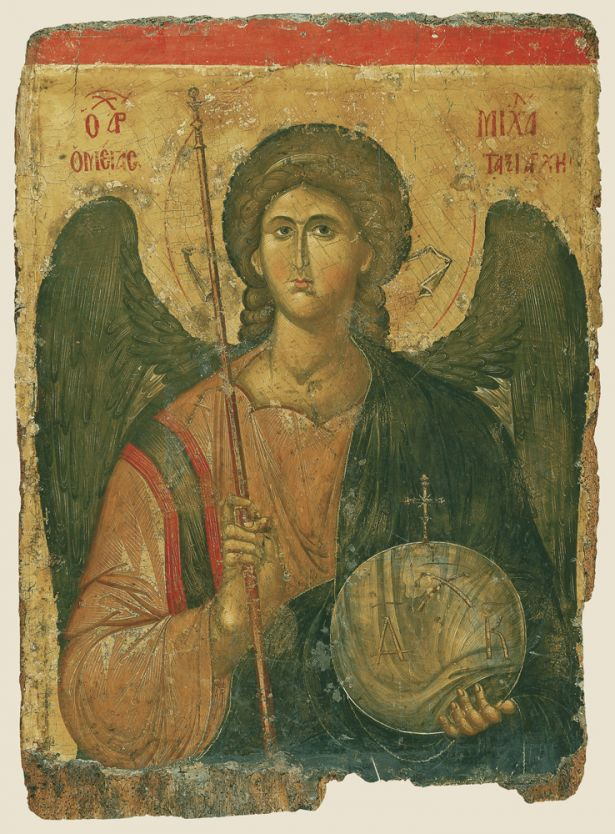 Ο ΑΡΧ(ΩΝ) ΜΙΧΑΗΛ Ο  ΜΕΓΑC ΤΑΞΙΑΡΧΗ(C) (the Chief [among angels] Michael Grand Taxiarch) is depicted in a formal, frontal pose, with wings open, wearing a chiton and a himation.  In his right hand he holds a sceptre, while in his left he has the transparent globe of the world, with a cross on the top and the gold initials Χ Δ Κ (for Christ [Χρίστος] Just [Δίκαιος] Judge [Κριτής]) in the centre together with a depiction of a lion.  The image of the lion on the globe, the title given to the archangel and its association with the Angel Michael in the Last Judgement incline us to suppose that the scene has some eschatological context, that is that it refers to the Day of Judgement, an interpretation which the archangel in his capacity as psychopomp underscores.

From an iconographical point of view the Archangel can be connected with the figure of the Archangel Michael from the larger scene of the Last Judgement in the Chora Monastery in Constantinople (1315-1320).  Here too the rare initials on the globe are repeated.  The fact that the icon comes from Constantinople, its direct connection with the marvellous wall-paintings of the Chora Monastery and the high quality of the painting allow us to attribute this work to an important workshop based in Constantinople in the first half of the 14th century.