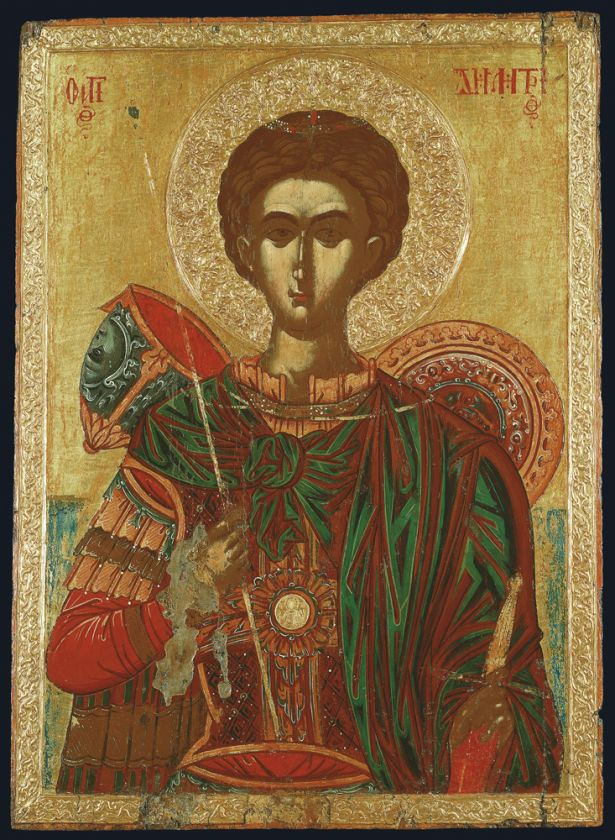 Saint Demetrios is depicted frontally, half-length, youthful, clean shaven and with short, dark hair, against a two-tone background, gold in the upper part and deep blue in the lower part.  He wears a coronet studded with precious stones in his hair.  He is in military dress (with armour over a tunic) and a helmet and small, round shield are slung over his shoulders.  In his right hand he carries a spear and in his left a sheathed sword.  His head is encircled by a raised halo decorated with stylized plant ornament, while the centre of his breastplate is decorated with a gold medallion in relief bearing an image of Christ.  The icon is bordered by a gold band, also decorated with plant ornament in relief.

The earliest icons of St Demetrios are dated to the end of the 10th and early 11th century.  In this icon elements from Palaiologan and Post-Byzantine images of military saints are combined. The high quality of the painting, and its iconographic and stylistic characteristics connect it with the art of the School of North Eastern Greece and more particularly with the work of its chief exponent Frangos Katelanos and his circle.  The icon's provenance, the Hypapante Church [Church of the Presentation in the Temple] in Thessaloniki,  reinforces this attribution, as there are two other icons from the iconostasis in that church which have been attributed to the same artist.  These two paintings and two others, from the church of St Athanasios in the same city, make up a group which Katelanos probably created during his stay on Mount Athos, when he was painting the St Nicholas chapel in the Grand Lavra in 1560.