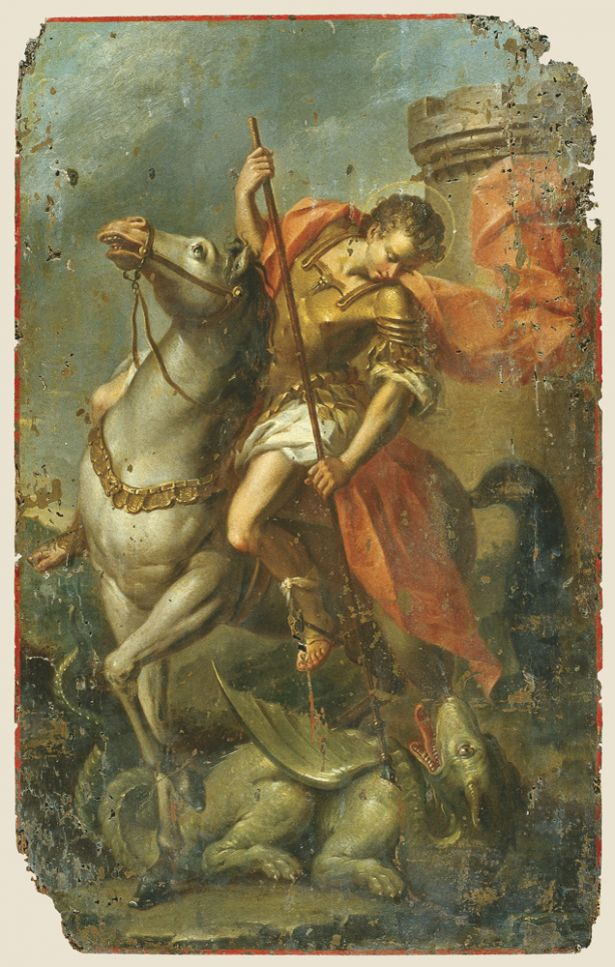 The saint is depicted on horseback, at the moment when he pierces the dragon with his spear.  On the right in the background a tower rises up, while on the left are some suggestions of landscape. The chief virtues of the works are the careful balance in the composition and the unity of colour, based on the almost exclusive use of many different tones of brown.  The panel has been painted in oils.  It expresses the naturalistic style which predominated in Western Europe from the Renaissance onwards. The almost Romantic atmosphere is striking, suggested by the almost calm attitude of the saint who is killing the monster, and the human gaze which the horse is directing towards the lightest part of the sky, the point from which the light which floods the composition flows.  This gaze hints at the presence of God, who thus becomes more "natural", without undermining the work's claims to realism.

The panel is signed: "χειρ Νικολάου Καντούνη ιερέως" (by the hand of Nikolaos Kantounis priest).  The Zakynthian artist Nikolaos Kantounis (ca. 1768-1834), came from a wealthy and cultivated family and worked on Zakynthos. He painted in the Western style, which in effect had been brought to the Ionian Islands a century earlier by the painter Panagiotis Doxaras (1662-1729).  The works of the Ionian painters (Panagiotis and Nikolaos Doxaras, Yiannaki Koarais, Nikolaos Koutouzis, Nikolaos Kantounis) were produced in a cultural climate which was not only beyond the bounds of Byzantine artistic tradition but consciously rejected it, considering it clumsy and irritating.  Nevertheless this tendency in Ionian painting developed in an Orthodox environment.  Kantounis himself, who was one of its principal exponents, was an Orthodox priest.