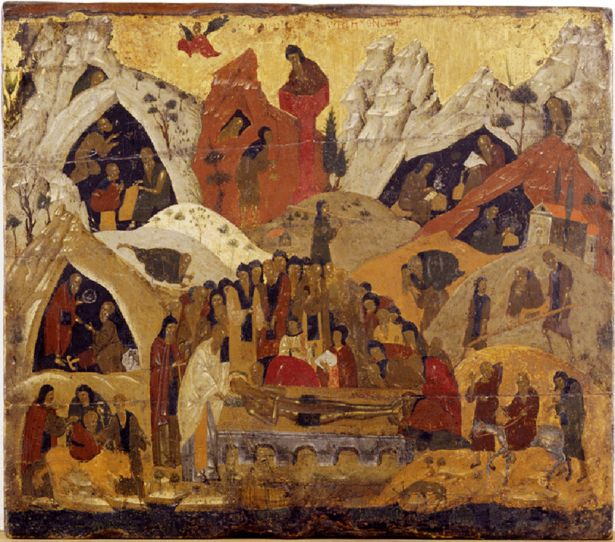 In the centre of the lower part of the icon St Onoufrios is depicted lying on his deathbed, surrounded by holy men.  In their midst two clerics stand out.  In the background a natural landscape unfolds on different levels in which caves have been created where scenes from the ascetic life are depicted. Against a gold ground a flying angel is transporting the saint's soul to heaven.

This composition is derived from similar scenes dating back to the Palaiologan period.  The subject was created by Cretan artists in the 15th century and became very popular in the Post-Byzantine years.  Deathbed scenes of other holy men, such as Sts Saba, Ephraim, Luke of Steiris etc., use a similar iconography.  A special feature of the iconography in this case is the depiction of the saint without monastic habit or shroud, just a loin cloth of leaves, something not found in other similar dormitions.  Perhaps the exceptionally harsh life led by St Onoufrios made the artist depict him this way.

The stylistic characteristics suggest the icon should be attributed to a Cretan workshop of the second half of the 16th century.