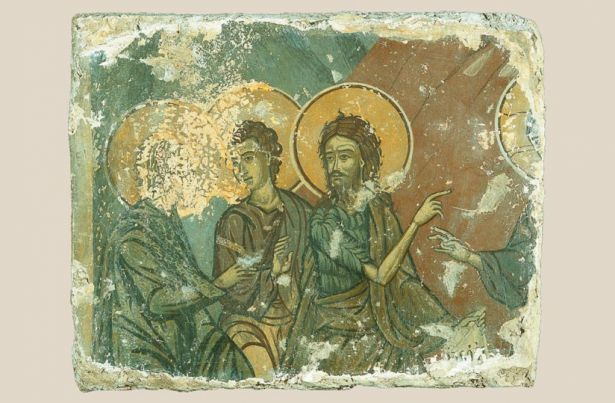 In the surviving part of the scene St John the Baptist is depicted accompanied by two disciples.  The figure depicted on the left is probably the Apostle Andrew, in accordance with the narration in St John's Gospel (John 1.35-41).  The Baptist is pointing Christ out to them.  The figure of Christ occupied the now lost right-hand part of the painting –only his right hand and part of his halo survive.  The paint surface is damaged in other parts, above all the face of Saint Andrew. The wall-painting comes from the katholikon of Saint Philothei Monastery in Athens, which was demolished in the 19th century.  The church was dedicated to St Andrew and the scene was probably part of an extensive cycle of wall-paintings with scenes from his life.  The iconographic and stylistic characteristics of the scene reveal a 17th-century artist who was following models from Cretan painting.