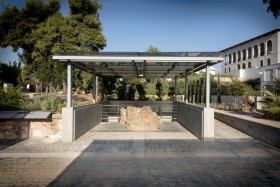 The concept of afterlife in heaven (Paradise) dominates Christian beliefs about death, as a long sleep that lasts until the Day of the Last Judgement, when the gates of Paradise shall open to welcome the righteous. This conviction is often reflected in Early Christian tombs with inscribed, hewn and painted symbols of eternal life and scenes of Paradise as a walled garden with abundant vegetation. The souls of the dead are depicted as birds pecking on fruit or drinking water from vessels and fonts, alluding to eternal peace and happiness.

Burials in the vicinity of the Ilissos River

Cemeteries, always located outside the city walls and often along major roads, were indistinctly used for Christian and pagan burials in Late Antiquity. Present Vasilissis Sophias Avenue could possibly be identified as the major thoroughfare, which connected Athens to Mesogaia in Antiquity. From classical times (5th-4th century BC) to at the very least the 6th century AD, the south side of this thoroughfare as far as the Ilissos River was used for burials. Tombs have been found in present Rigillis Square, Rizari Street, the Byzantine Museum grounds and even further south, along Phalerou Street.

A tomb was uncovered in 2007, during works carried out in the Museum estate. Only four wooden nails were found inside the tomb, indicating that the deceased may have been buried in a coffin. No evidence was found to determine the deceased’s religious faith.

The tomb belongs to the standard cist-grave-type and dates back to late Roman times, possibly 3rd century AD. The brick wall to the right side may have been used to indicate the burial.

The tomb had masonry walls and was covered by four marble slabs and a small marble column – all architectural elements re-used from an earlier structure. The partial destruction of the covering slab allowed water to flood the tomb, shifting and destroying the skeletal remains.

A few meters southwest of the tomb, two more similar stone slabs, possibly covering slabs, were found, suggesting that a cemetery may have existed in the area of the present Museum grounds - at least during the Late Roman era.

The archaeological excavation at the Petmeza Shaft

Part of a cemetery, in use from the Archaic (7th-6th century BC) to the early Byzantine period (3rd-6th century AD), was uncovered at the corner of Petmeza and Phalerou streets, in Koukaki in 1996-1997,during the construction of the Athens METRO.

Three of the 64 tombs found, dating from the early Byzantine era and possibly belonging to Christians, were removed to the Byzantine Museum grounds.

The three rectangular vaulted tombs were probably family tombs. Their entrance was sealed off with a horizontal slab that opened for each subsequent burial. Three steps on the eastern side allowed descent into the tomb’s interior. Clay vases, bronze buckles and a loom weight were found within the tombs, probably objects dear to the deceased during their lifetime.