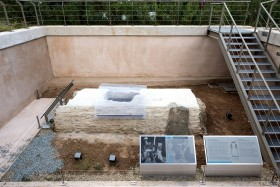 The well-cistern was hewn out of the rock at an uncertain date, with two relieving arches along its length combined with two smaller ones, set across. Today, the well cistern is covered by a semi-cylindrical barrel-vault of rubble masonry and mortar, built not earlier than in late 19th century. Four slate slabs pave the mouth of the well cistern. The well-cistern was either used as a well or as a local water management unit to supply water and irrigation to the area. However, no conclusive evidence exists whether it was connected to another water supply system as a hub or a terminus. In any case, water was drawn either

with the help of a beam or by lowering a bucket or perhaps by means of a more complex pumping system. It remains unknown whether the Ilissia complex was supplied by the well-cistern at the time of the Duchess of Plaisance, or after it has been ceded to the Greek army.