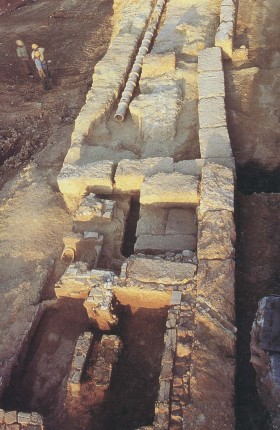 The route of the Peisistratid Aqueduct, the first large-scale water supply work in ancient Athens, has been traced very close to present Byzantine Museum grounds. The Aqueduct that was build by the tyrant Peisistratos (c. 540-530BC) was absorbing water from the fonts of Mount Hymettos and it had an overall length of 6 to 7 km. Its underground tunnel followed the bed of the Ilissos River and branched to the north and south of the Akropolis, providing water supply for fountains and nymphaea.

A second major aqueduct was constructed in Athens between 125 and 140 AD, by the Roman Emperor Hadrian. Its 20 km route started out on the slopes of Mount Penteli and ended in a brick cistern on Lykabettos Hill. Hadrian’s aqueduct supplied the city up to the 18th century. Other aqueducts were built, on a lesser scale, between the 16th and 18th centuries, while a section of Hadrian’s aqueduct became operational again around 1870.