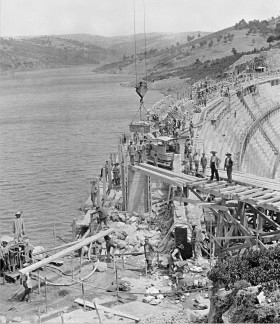 Athens experienced rapid population grow through rural migration after its being declared the capital of the Greek State in 1834. Water supply problem was then intensified, since increasing population needs meant even greater demand on the 55 then-existing, already scarce, municipal fountains.

Water-supply infrastructure was addressed as an urgent need in early 20th century, leading to the Marathon dam construction by the US Company Ulen between 1926 and 1931. Ulen’s rights and obligations were transferred to the Greek Water Company in 1974. The latter merged with the Greater Athens Sewerage Organisation in 1980, forming the Athens Water Supply and Sewerage Company (EYDAP S.A.). A second dam was constructed on the Mornos River in the 1970s. The Mornos Aqueduct has been supplemented by the water of the Evinos (Euenos) River since 2001, by means of a new dam built at Evinos between 1992 and 2001, and a tunnel joining the reservoirs of the two rivers.