Byzantine and Christian Museum :: About .::. Archives 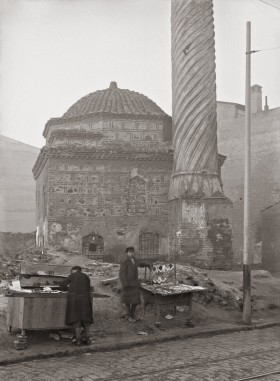 The Archive of Historical Documents and the Historical Photographic Archives are also part of the Museum's collections.  A great many documents and other historical testimonies give invaluable information about the founding (in 1884) and the history of the Christian Archaeological Society (XAE), and the founding and development of the Museum from the early days of the Supervisory Committee, chaired by Adamantios Adamantiou (1914-1923), up to recent years under directors Manolis Chatzedakis (1960) and Paul Lazarides (1975).

One of the most important historical and photographic archives in the Museum is XAE's Photographic Archive. The creation of this archive, and indeed of the whole XAE collection, is considered the life work of its founding member George Lambakis, an outstanding photographer and a pioneer in archaeological documentation.  As is well known, the XAE collection was incorporated into the Byzantine Museum in 1923.

Another photographic archive was assembled later by the Director of the Byzantine Museum, George Sotiriou (1923-1960), which documents the long career of this eminent Byzantinist as an excavator and researcher in Greece, Cyprus, Sinai and at the Patriarchates of Alexandria and Constantinople.

In 1964, on the occasion of the exhibition "Byzantine Art: An European Art" (Zappeio, April-June 1964) and with financial assistance from the Council of Europe, an international Photographic Archive of Byzantine Art began to be assembled. The project was never completed but it produced photographs of the exhibits from that exhibition and a large number of negatives and prints, depicting objects from other museums and collections, now in the Byzantine and Christian Museum.

Around the same time, in 1963, part of a collection of photographic negatives belonging to the photographer Perikles Papachatzedakis (1909-1990), mostly made up of pictures of the Meteora Monasteries, was bought.

Finally the archive of the Central Conservation Laboratory, which has been housed in the Museum for a number of years, contains photographic material from conservation projects on Byzantine and later monuments in Greece, revealing them as works of exceptional importance after their conservation.