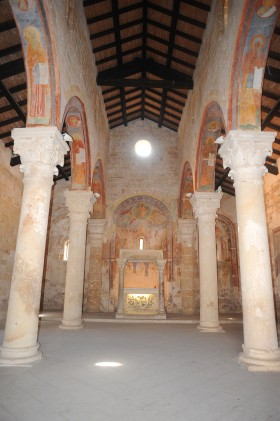 The Byzantine and Christian Museum invited the audience to a cycle of lectures organized in the occasion of the periodical exhibition “Byzantine Salento. Through the camera of Foteini Kaїmaki”

The first lecture (in English), “When Italy meets Byzantium. Pictorial evidence from South Apulia”, was on Wednesday, December 5th, 2012 at 19:30.

The Norman conquest of Southern Italy in 1071 brought to an end the Byzantine dominion of the region. Byzantine culture and practices survived into the following centuries however, enduring in church fresco decorations for centuries till Western pictorial influence gradually prevailed.

A series of monuments, dating from the 10th to the 14th centuries, examined: the little church of Saint Peter at Otranto, the cave church of Saints Christina and Marina at Carpignano Salentino firstly and the numerous cave churches of Northern Salento.

Two other study cases considered: the Italian-Greek monasteries of Saint Maria at Cerrate and of Saint Mauro near Gallipoli.