“Byzantium and the Others in the First Millennium: An Empire of stability in a turbulent era” 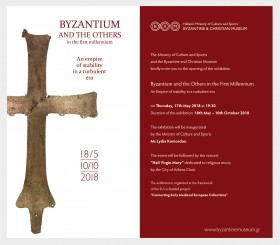 The Hellenic Ministry of Culture and Sports in joint collaboration with the Byzantine and Christian Museum, present the temporary exhibition “Byzantium and the Others in the First Millennium: An Empire of stability in a turbulent era”.
The duration of the exhibition is from May 18th till October 10th 2018.
The exhibition will be inaugurated by the Minister of Culture and Sports, Ms. Lydia Koniordou, on May 17th at 19:30.

Through six thematic sections: “Transition”, “Worship”, “Intellectual Life”, “Warfare in the Western and Eastern Roman Empire”,“Secular Life” and “Trade”, the exhibition highlights the role of the Byzantine Empire as a stability pole during the turbulent era of 300 – 1000 A.D, both in the European continent and in the broader area of the Mediterranean Sea and the East.

The exhibition is organized within the framework of the EU project “CEMEC - Connecting Early Medieval European Collections”, co-funded by the Creative Europe Framework, the Hellenic Ministry of Culture and Sports and the Byzantine and Christian Museum.

The following Museums and Ephorates agreed to loan collection items for the realization of the exhibition: