Byzantine and Christian Museum :: Permanent exhibition .::. I. From the ancient world to Byzantium .::. Ι.4. Christianization of the ancient temples

Ι.4. Christianization of the ancient temples 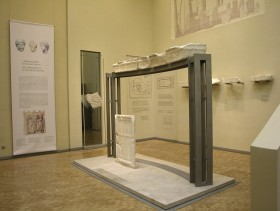 The legalization of the Christian religion in A.D. 313 and, consequently, the eventual prevalence of Christianity across all the empires provinces took place during a time when the ancient world and its religious structures were already beginning to be shaken. This weakness was further exacerbated by the states efforts to suppress idolatry. Measures were taken from the mid-fourth century that forbad religious practices running counter to Christian belief. As part of the process of decontaminating the places were idols had formerly been worshiped, many ancient temples and monuments were converted to Christian churches. This reuse of ancient structures for new purposes was a phenomenon that appeared across the empire in the course of the sixth century, a period when most of the temples had anyway been abandoned by their former dedicants. Nevertheless, Christians did not miss the opportunity to demolish pagan monuments and works of art when circumstances allowed.