Byzantine and Christian Museum :: Permanent exhibition .::. I. From the ancient world to Byzantium .::. I.6. "In pastures green": Christians in the face of death

I.6. "In pastures green": Christians in the face of death 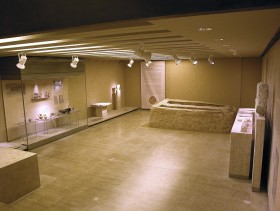 Death, according to Christian teaching, is the passage from the corruptible, material world to eternal life, “in a place of light, in pastures green, in a place of refreshment”, in words read during the Orthodox burial service. Death is a long sleep in anticipation of the resurrection at the time of the Second Coming. “Before the coming of Christ, death was called death...but since Christ has come...it is no longer called death, but rest and sleep” (John Chrysostom, Patrologia Graeca 49.393-394).

During the first three centuries A.D., Christians usually buried their dead in the pre-existing cemeteries that were used by pagans as well. The first exclusively Christian cemeteries came into use toward the end of the second century.

Types of Christian tombs – vaulted, cist-graves or simple pits – did not differ from earlier Hellenistic or Roman forms. Indeed, many Christian burial practices, such as the deposition of grave goods with the dead, performance of rites in their memory, and placing of offerings on top of graves, indicate how pagan customs passed into Christian tradition.