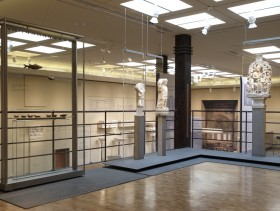 Christian art was born in the period of late antiquity (2nd-4th centuries A.D.), in the bosom of the Roman Empire, and in order to express their belief Christian artists and patrons chose to employ the figurative language of the age. Christians borrowed familiar forms from the Greeco-Roman world, and imbued them with new content. The figure of the shepherd carrying a lamb on his shoulders, ultimately derived from the Greek statues of the calf-bearer (moschophoros) or kid-bearer (kriophoros), was used to portray the idea of Christ as the Good Shepherd who, in accordance with scripture, “giveth his life for the sheep” (John 10:11). Another suitable figure was Orpheus, the mythical lyre-player from Thrace who worked his musical spell over wild animals that were shown gathered round him in late antique art. Christians considered that Orpheus could be understood allegorically as Christ, who with his words tames the hearts of even the fiercest of men. Likewise, the philosopher, among the most popular figures in art of the late antique period, also became one of the prototypes for the representation of Christ as a young man.