Byzantine and Christian Museum :: Permanent exhibition .::. I. From the ancient world to Byzantium .::. Ι.2. Secular life 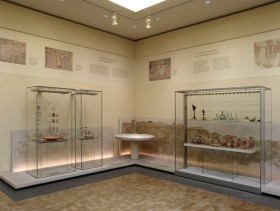 During the early Byzantine period, public and private life retained their defining characteristics more or less unchanged from Greco-Roman times. Many ancient cities continued to exist and even new urban centers came into being. Nonetheless, the greatest part of the population lived in the countryside and the empire’s economy continued to be supported by agricultural production.

Industry and commerce were still the basic modes of activity, and the form and organization of households remained true to earlier practice. The spread of Christianity did, though, instigate serious changes in everyday life. The new religion left its impression both on luxury products of high artistic value such as jewelry, and on the cheapest and commonest objects such as ceramic utensils and metal objects.