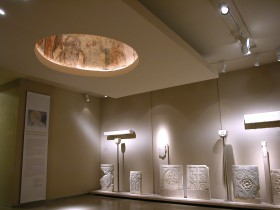 Attica was an important province of the Byzantine Empire on account of its agricultural and industrial productivity, but also for its cultural contribution  the city of Athens, indissolubly associated with its ancient past, remained a center of learning. The closure of the philosophical schools by Justinian in 529 provoked a temporary period of decline, though the city experienced a renewed flowering in the middle-Byzantine years. In 1018, for example, Basil II made a pilgrimage to the Virgin Atheniotissa in the Parthenon and made precious offerings after his victory over the Bulgars.

The many-layered architectural tradition and a lasting taste for innovation were stamped on the dozens of new churches built at this time across Athens extensive urban fabric, with the result that a new type of church came into being, that known as Athenian. Its main features were small dimensions, harmonious proportions, an elegant eight-sided dome and carefully executed stonework with elaborate brickwork decoration. The countryside was home to structures that were humbler in both plan and materials, but met the cultic requirements of the agricultural communities.