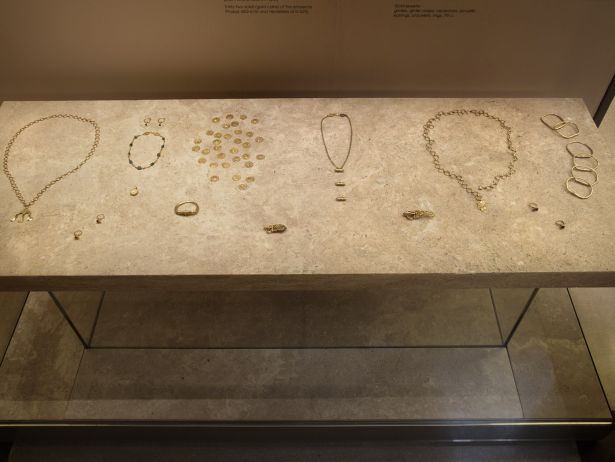 The Mitylene Treasure, a collection of sixteen silver plates, twenty-one items of gold jewellery, thirty-two gold coins and one bronze seal, was discovered by chance in 1952 in a place called Kratigos on the island of Mitylene (Lesvos). These precious objects had been buried by their owners in the first decades of the seventh century, as can be concluded from the coins which are dated to the time of the Emperors Phokas (602-610) and Heraklios (610-629), to preserve them from possible enemy looting.

The silver vessels in the hoard consist of four plates with crosses engraved at the centres, two deep bowls with handles (trullae)  possibly for hand-washing, eight spoons, a hanging lamp and a candlestick.

The gold jewellery is made up of seven bracelets, one with a monogram, a necklace, a pair of earrings, four rings, four amulets, two belts and two buckles.

The objects in the hoard give us interesting information on the identity of their owners.  At the same time they supply invaluable evidence as to the cultural climate in the period, about art in its various applications and the survival of iconographic subjects from the polytheism of Antiquity. Moreover they offer information about private life: the trappings of well-to-do households and the use and symbolism of jewellery and accessories.  Thanks to them we still know about the assaying and stamping of precious metals by the authorities and individuals.   The Mytilene Treasure significantly expands our knowledge of the seventh century.  It is an important archaeological find from a turbulent period which has rendered up little in the way of material remains to date.

The imperial control stamps punched into the base or the reverse of some of these objects are of particular interest.  They are the so-called "five-stamp control marks" which were used on silver plate as a guarantee of the purity of the metal from the late fifth up to the seventh century, which permits scholars to date them with relative accuracy.

The presence of the gold jewellery in the hoard is a strong indication that this collection of objects belonged to a wealthy family and not to some Christian church, as was once maintained.  Some of the pieces, on account of their small size, seem to have been worn, not by adults, but by the children of the family.  As in the Greco-Roman world, so in the Byzantine civilization, jewellery was not used simply for ornament.  According to its value and type it could be a means of displaying wealth or social status, but it could also be talismanic.  For example, the small gold disc decorated with a cross would have been worn on a chain round the neck not just to declare the owner's Christian faith but also to protect him or her from evil.