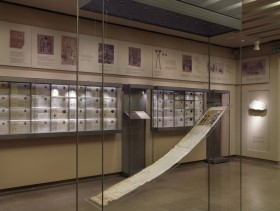 In earthly correspondence with the divine order, under one God, the emperor alone possessed supreme temporal power. The crowned emperor was Gods elect, His representative on earth. The emperor embodied all virtues as well as the law; all authority proceeded from him and was conferred on the empires officials according to their place in the political, administrative and military hierarchy.
One of the essential virtues of any emperor was peerless courage. As the highest commander of the army, the emperor often led his forces into battle; the security of the empires frontiers was his constant concern.
While the patriarch of Constantinople was the head of the Church, there too the emperor played a supervisory role and enjoyed special privileges. Church and State sought jointly to unite all peoples under the aegis of Christ and, consequently, the Byzantine emperor, his earthly viceroy.