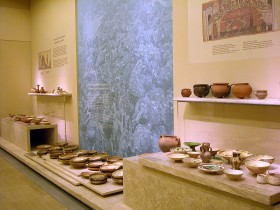 Everyday life is an especially important area in the study of Byzantine culture, but one which has not been sufficiently pursued since scholars’ interest is so often drawn to the glittering works of Byzantine religious art. The objects that served routine needs are by and large made of “humble” materials such as clay, glass or bronze, but represent, nonetheless, significant evidence for everyday life in Byzantium. Indeed, many aspects of this everyday life continued in one form or another into modern Greek society.

The overwhelming majority of the empire’s population lived in the countryside, which served as the basis for economic and social organization. An urbanized economy grew up in cities, some of which were distinguished as administrative, military, commercial centers, or hubs for transport and communication. Trade by both land and sea also developed, as well as industry and crafts, such as the production of textiles and pottery, sculpture, carving, and metallurgy.