ΙΙ.4. The wall paintings of a Byzantine church: Episkopi in Evrytania 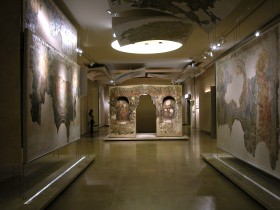 The church of the Dormition of the Virgin, known also as Episkopi, was located on the western shore of the Megdova River.
During the 1960s, the construction of a hydroelectric dam on the Acheloos River and the creation of the artificial lake of Kremasta doomed the church and surrounding area to submergence. Before the building was deluged, and while work was going on to record it, two earlier levels of painting from the ninth and the mid-eleventh centuries were discovered and removed from beneath the later thirteenth century painting. Much later, perhaps after a period when the church was allowed to fall into ruin, a stone-built templon was constructed, probably in the seventeenth century.