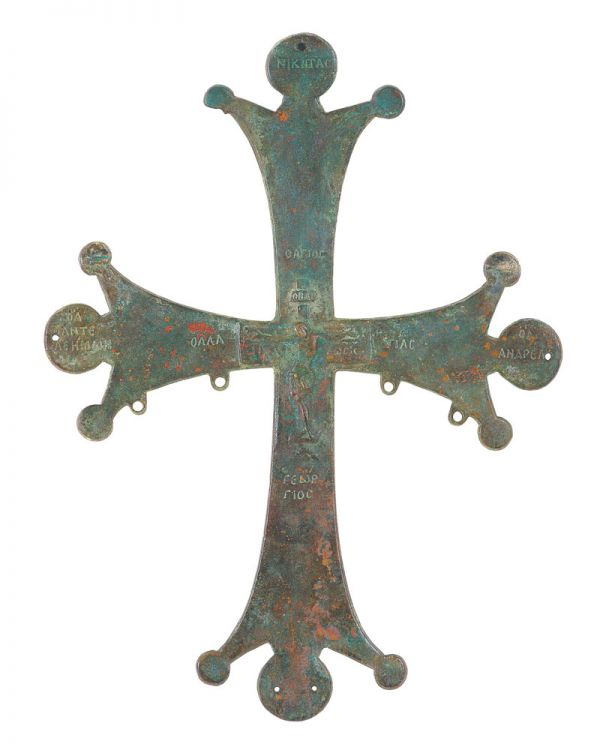 This sort of cross was placed in the sanctuary, behind the altar, or in other parts of the church.  When they were processed during services they were probably attached to a pole.  The arms of the cross flare out, each ending in three circular projections or roundels.  The middle roundel is larger than the two undecorated ones on either side.  On the lower edge of the cross arms are four rings for hanging decorative chains (pendelia).  The cross is decorated on both sides with incised inscriptions and decorated with, somewhat damaged, scenes in relief.  As was established by radiography it has been cast as one piece, with no attached parts.   On the obverse, the cross arm is decorated with three busts, which make up a Deisis: Christ is in the centre with, on either side, the Virgin (on the left) and St John the Baptist (on the right), who are praying for the salvation of the world. Christ is surrounded by the inscription Ο ΩΡΑΙΟΠΥ / ΛΕΙΟΤΗC [O ORAIOPY / LIOTIS].  Perhaps this was the name of a church dedicated to Christ to which the cross may originally have belonged.  At the top of the vertical arm is an archangel in a roundel, probably Michael, wearing imperial dress and holding the globe of the world.  At the bottom edge is a bearded military saint, probably Theodore, who holds a shield and a spear.  The reverse has a raised cruciform plaque with a Crucified Christ in relief on which the inscription: Η  CΤΑV  /  ΡΩC ΙC ("The Crucifixion") can be made out.   The plaque is flanked by an incised inscription: Ο ΑΓΙΟC  /  ΓΕΩΡ  /ΓΙΟC (Saint George) on the upright and the enigmatic: ΟΑΛΑ  /  ΓΙΑC (which can be transliterated as OALA  /  GIAS) on the cross arms. On the three roundels at the ends of the arms are inscribed: (on the left cross arm) Ο ΑΓ(ΙΟC)  /  ΠΑΝΤΕ / ΛΕΗΜΩΝ (S[AIN]T / PANTE / LEIMON); (at the top of the upright) Ο ΑΓ(ΙΟC)  / ΝΙΚΗΤΑC (S[AIN]T NIKETAS); and (on the right cross arm) Ο ΑΓ(ΙΟC)  /  ΑΝΔΡΕΑC (S[AIN]T ANDREW), though the inscriptions are not accompanied by the corresponding figures.  Holes at the edges of the roundels, which have partly destroyed the inscriptions and were probably bored through at some later date, bear witness to the cross having been used for another purpose such as hanging in pendant form from a polykandelon or chandelier.