Double-sided icon with the Crucifixion and the Virgin Hodegitria (00995) 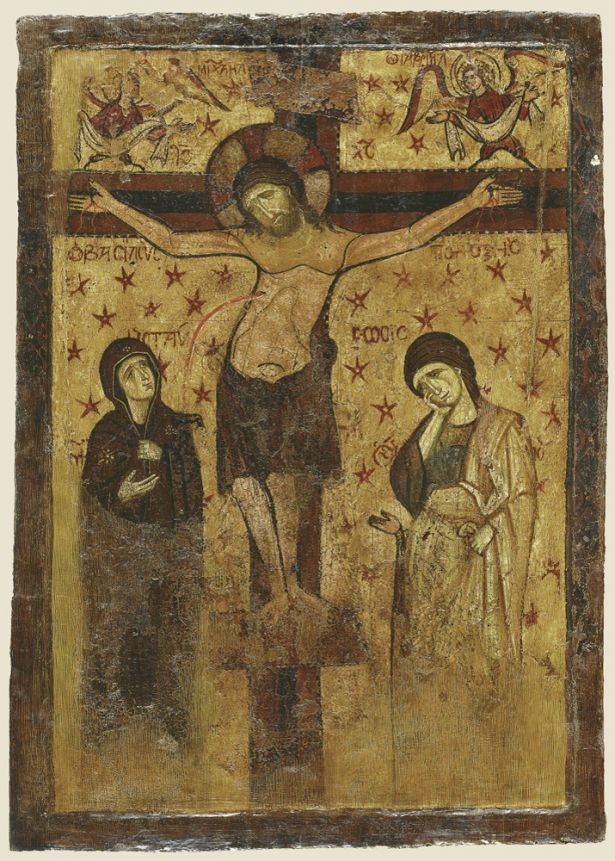 The Crucifixion is depicted with great simplicity against a gold ground.  The Virgin stands to the left of the cross and St. John to the right.  The archangels Michael and Gabriel are depicted in the upper corners, holding out cloths, ready to receive the dead body of the crucified Christ.

The image is dated to the 9th century.  The inscriptions and the stars which decorate the background were probably added in the 10th century.  In the 13th century the face of Christ and the figures of the Virgin and St John were overpainted, to cover up damage to the paint surface.  In their initial form the two figures to left and right of the cross seem to have been quite a bit smaller than Christ.  For example St John's halo from the first phase of painting (9th c.) can be made out at chest height on the 13th-century figure, and a third hand projects on a level with his waist.

X-ray examination of the icon has shown that the 9th-century Christ was painted with his eyes open, in other words alive on the cross.  This was customary in earlier depictions of the Crucifixion in Byzantine art (6th and 7th c.), in order to emphasize the divine nature of Christ and his victory over death.  But features dating to the 9th century refer to Christ's human nature.  In fact they connect his death with the divine Eucharist, the sacrament of the Christian Church which re-enacts Christ's sacrifice for the salvation of the world. Blood and water flow from Christ's side and are collected in a chalice (traces of which have been preserved on a level with the Virgin's shoulder).  The priest mixes wine and water in a similar vessel when celebrating the Eucharist, which, according to Christian dogma, are turned into the blood of Christ during the sacrament.  His human nature and the sacrifice the incarnate Christ made were stressed to a greater extent in the 13th century when the face of Christ was painted with closed eyes, as was customary in Byzantine art.

On the reverse of the icon there was probably initially an image of the Virgin, which was overpainted in the 16th century with a Virgin and Child in the iconographic type of the Hodegitria.  The depiction of the Christ Child in the arms of his mother is connected with the message of the Crucifixion on the other side of the icon: the Son of God became man in order to sacrifice himself for the salvation of the world.

The icon comes from Thebes.  It was probably on an iconostasis as a despotic icon, in other words situated right next to the sanctuary doors.  One side would be visible from the body of the church, while the other was seen only in the sanctuary.