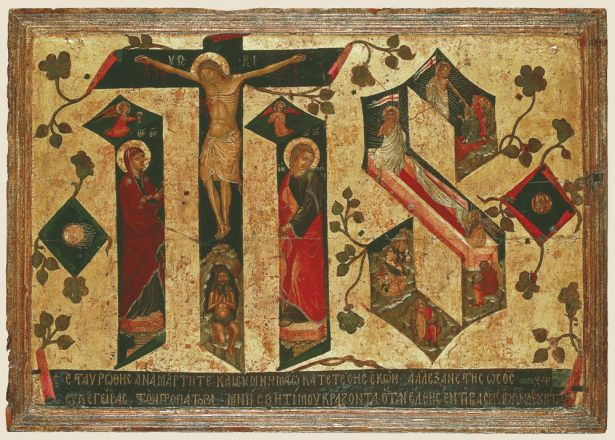 Depictions of the Crucifixion, the Resurrection and the Descent into Hell are combined in the initials of the abbreviated Latin inscription I(esus) H(ominum) S(alvator) (Jesus Saviour of Mankind), the emblem of the Franciscans, created by St Bernardino of Siena.  The Crucifixion is represented in the first two letters.  It is a simple scene, including only the three basic figures of Christ, the Virgin and St John.  The composition is of special interest with regard to the rare depiction of Adam in bodily form in front of the cave.  Above the figures of the Virgin and St John are depicted two flying angels.  The one on the left is collecting the blood flowing from the wound in Christ's side in a bowl, while the one on the right averts his gaze.  In the letter S are depicted two successive scenes with the Risen Christ: The Anastasis, the Byzantine version of the Descent into Hell with the raising of the dead and the Western version of the Resurrection with Christ triumphant rising from the tomb. The gold ground is decorated with flowering stems, while to left and right the sun and moon are depicted in lozenge shapes.    At the bottom on a black band with gold lettering the Paraklitiki (Intercessionary) troparion, which is read at the early morning service on a Sunday, is inscribed.

Laboratory examination of the icon showed that the troparion and the name of the artist were added later, when various parts of the icon were overpainted.

The composition, unknown in either Byzantine or Western iconography, must be a creation of the Cretan artist Andreas Ritzos.  This unique and original subject of the I H S is one of the most important examples of Italo-Cretan painting and shows the artist's familiarity with Western painting, as a result of the conditions prevailing in Venetian-ruled Crete in the 15th century.  Elements of the International Gothic style are harmoniously combined with features of Byzantine painting and confirm the variety of subjects which were circulating on the island. One of the main reasons for this is the fact that the artists' clientele was not limited to Greek Orthodox, but extended to Catholics of various social classes and occupations who were living in Crete and outside.