Wall-painting with the Ascension (01736) 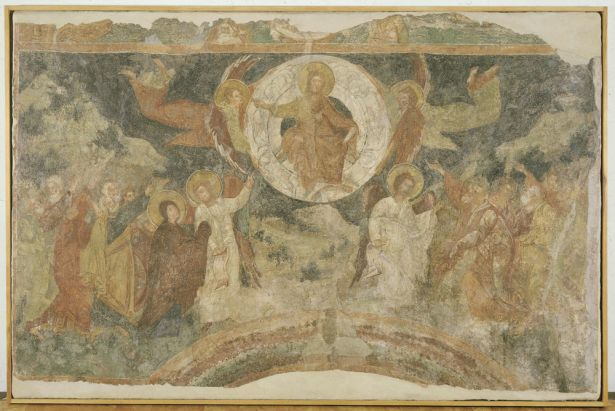 In the centre of the composition Christ is depicted seated on a rainbow in a glory (or circle of light), borne by two angels. Around the perimeter of the glory other angels, painted in monochrome, can be made out.  Below the apostles are depicted gesticulating in a lively fashion.  They are divided into two groups, with two angels dressed in white at the head of each.  The angel from the left-hand group is accompanied by the Virgin, who is raising her hands in supplication.  In the background three rocks dominate the scene, while olive trees recall the Mount of Olives, where the Ascension took place according to the scriptures.  The wall-painting has been detached from the katholikon of the Hodegitria Monastery in Apolpena on Lefkada and was painted in the mid-15th century, a time when the island belonged to the Duchy of Cephalonia, ruled by the Florentine Tocci family.  The wall-paintings from the church, the work of a notable Byzantine artist, combine elements from Byzantine and Western (Late Gothic) art in a unique fashion.