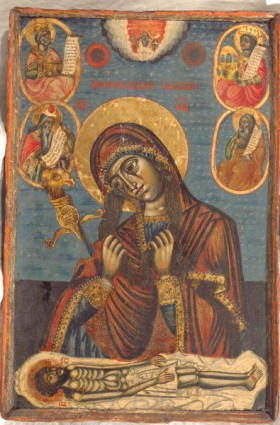 Taking the Museums collection Refugees Heirlooms as its starting point the exhibition traces the links between the objects and the people.

Irrespective of their present-day use  whether exhibits in state museums, in churches or in private spaces  the heirlooms from Asia Minor, function as symbols of memory and identity, as the various testimonials from people associated with them demonstrate.  .
The journey of the people and the heirlooms starts in the early twentieth century.

The journey made by the people and their precious relics begins in the early twentieth century. After the Asia Minor disaster hundreds of boxes full of heirlooms from the churches of the Greek Orthodox communities of Eastern Thrace and Asia Minor were brought together for safe-keeping in the Byzantine Museum. As the years went by many of them were returned to the refugees, while those which remained make up the museums Collection of Refugees Heirlooms: over two hundred objects (icons, vestments, liturgical vessels, manuscripts, books etc.) mostly coming from Cappadocia, Eastern Thrace and the Pontos (Black Sea) region.
Apart from the BΧMs Collection of Refugees Heirlooms the exhibition includes other such precious heirlooms from the Benaki Museum, the Museum of Asia Minor Hellenism, Filio Chaïdemenou, refugees churches, refugee associations, personal mementoes and icons, which have been loaned by the descendants of refugees from Asia Minor.

These heirlooms, together with documents, documentary photographs, oral testimonies from the refugees and staff of the museum, as well as audio-visual exhibits make up the interactive environment of the exhibition.

This exhibition is being mounted in the framework of the research programme ICON NETWORK (2007-2009), which is part-funded by the CULTURE Programme (2007-2013) of the European Union.