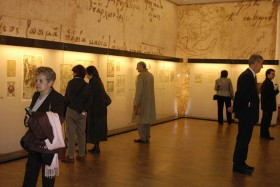 The anthivola, print or pricked sketches, constituted a kind of iconographic guide for the painters who undertook the decoration of churches with mural paintings or portable works, as well as that of secular buildings with landscapes, portraits and painted chests. The Chionadite painters apprenticed in monasteries of Mount Athos; they worked in churches and houses in more than a hundred villages of Epirus, Western Macedonia and Thessaly.Their sketches, indicative of their cosmopolitan character, were influenced by the monuments of the Byzantine past but also by contemporary European currents (baroque and rococo) and by the New Russian school of religious painting.

Next to their value as works of art, the studies and the anthivola constitute extremely valuable sources of information on the working conditions, the ways of diffusing iconographic protypes among the Postbyzantine painters, and on the creators themselves. The Chionadite painters' drawings reveal the invisible and mostly unknown work methods and techniques of the Postbyzantine workshops and allow us to approach from a different point of view the history of the folk religious art from mid 18th to early 20th centuries.