ENAMELS. COLOUR IN THE COURSE OF TIME 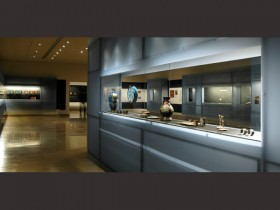 Although the art of enamelling has been known for centuries, it is now practised by very few artists. The Byzantine and Christian Museum is for the first time presenting an exhibition devoted exclusively to the art of enamel on metals. The exhibits cover a wide chronological and geographical spectrum.

They begin with examples of works dating from the Mycenaean period, after which are displayed secular and ecclesiastical objects from the Byzantine and Post-Byzantine period, from countries of West Europe and the Far East, and also modern pieces inspired by the Byzantine tradition or introducing new techniques and styles.

Enamel is a solid vitreous mass with an inorganic composition. The raw material used is glass, which is pulverised in a mortar and coloured by being mixed with various metal oxides. This mixture, which now has the form of powder or pulp, is placed on a metal surface and fired in a  special kiln at a temperature between 600o and 900o C. This creates a chemical fusion and when the glass cools it now forms a solid inseparable mass with the metal. This close fusion of the glass and the metal is the main characteristic of enamel and distinguishes it from other uses of glass as an inlaid decorative element.

During the exhibition, two lectures will be given at the Byzantine & Christian Museum by Costas Antonakis, Honorary Research Director at the National Centre for Scientific Research (C.N.R.S.) of France:
- Enamel: The long history of a rare art (16/1/2008)
- Enamelling and contemporary art. Application of new techniques (23/1/2008)