CHINA UNDER THE TANG. A golden era (7th-10th century) 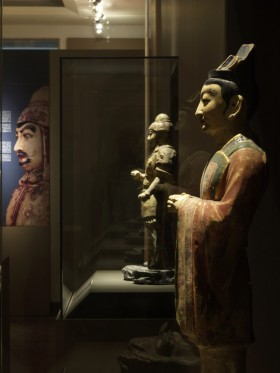 The Byzantine and Christian Museum, in collaboration with the Directorate of Museums, Exhibitions and Educational Programmes of the Hellenic Ministry of Culture, and with the National Museum of China, stages for the first time a major temporary exhibition that reveals unknown aspects of an influential and fascinating culture. The period of the Tang dynasty (AD 618-907) is one of the golden eras in the history of China.

The Chinese empire reached unprecedented economic and cultural heights, a number of important inventions were made, its area was doubled, and its political influence was widely consolidated in the continent of Asia.

The period of the Tang dynasty coincides largely with the critical period of the so-called dark-ages of Byzantine history, and with the first years of the Macedonian renaissance. The exhibition correlates the courses of these two civilisations, since in each of its parts the visitor has the opportunity to also get an idea for the respective aspect of Byzantine culture at the same period. This correlation offers a new reading of the Byzantine civilisation in association with a distant nation of the Far East.

Over 150 objects, mainly coming from graves and belonging to important Chinese museums, are presented in the new halls of the extension of the Byzantine Museum to reveal the life of the imperial court and the high-ranking, the relations of the Tang dynasty with neighbouring countries, the way emperors and nobles were buried, the afterlife beliefs and Buddhist cult. The exhibition is organised in four large topics:
1. Palaces and Administration
2. Towards the West
3. Life after Death
4. Buddhism