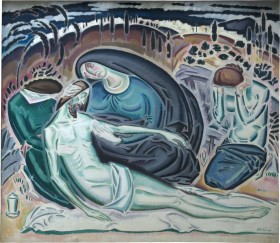 The Byzantine art was a subject for dialogue in the artistic community during the first half of the 20th c. The presented artists participated in this discourse concerning the value of the Byzantine art and incorporated afterwards elements of its heritage in their work.
The exhibition is divided in five units following the main aspects of the subject.

Kostis Parthenis (1878-1967) was the first artist to inaugurate a dialogue with Byzantine art and his work is presented in the first unit of the exhibition.

The third unit is dedicated to Photis Kontoglou (1895-1965), the central figure in the appraisal of the Byzantine artistic tradition and in linking it with modern art, who gathered around him other important painters. Yannis Tsarouchis (1910-1989) and Nikos Engonopoulos (1907-1985) owe a serious part of their artistic education in the study of Byzantine art, but also in their apprenticeship with him.

The part of the exhibition concerning the ecclesiastical commissions from the 1930s onwards attempts to present the gradual retreat from the Westernizing, Nazarene-style art which had predominated since roughly the mid-19th century in Greek religious painting, to a new, Neobyzantine style and in accordance with the rules of the Greek Orthodox church. Besides, during the inter-war period take place the only artistic efforts by Spyros Papaloukas (1892-1957), Spyros Vassiliou (1903-1985), Polykleitos Rengos (1903-1984), Agenor Asteriadis (1898-1977) to remodel stylistically this Neobyzantine style, efforts that remained luminous exceptions in a religious production without intention of innovation.

The last unit of the exhibition contains characteristic examples of the influence that the acquaintance with the Byzantine art had on the secular production.