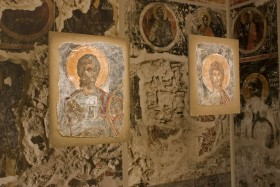 The Church of the Palaiopanagia, a cross-vaulted structure, stands in an isolated location between the villages of Loutsa and Steni on the island of Euboea. Its wall paintings are artistically noteworthy and may date from the latter half of the 16th century.

Later interventions have altered and detracted from its original architectural form, while repeated attacks by thieves specializing in antique religious works and artefacts have caused considerable damage to the churchs painted interior. Four illegally dismounted wall paintings from the church came to light in Switzerland, and a further three in the Byzantine and Christian Museum, where all seven were conserved.

A work written in Greek by the future Archbishop of Athens and All Greece Hieronymos II entitled Mediaeval monuments on Euboea would prove of considerable value in identifying these lost works, since it published a large part of the churchs painted decoration in photographic form in 1971.

The exhibition is divided into eight sections: presenting the Byzantine church of the Palaiopanagia as it was both before and after these brutal interventions, it also charts the struggle to have the stolen sections returned to Greece, while puts the dismounted wall paintings which have since come to light on public display. By focusing the visitors attention on how the works were identified, protected and conserved, the exhibition also highlights the pivotal role played by scientific documentation in the preservation of cultural goods and the piecing together of historical memory.