Per Kirkeby: A creative dialogue with Byzantine art. 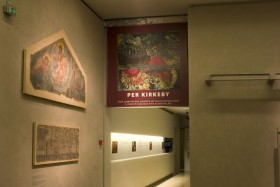 Per Kirkeby, one of the most important neo-expressionists artist in Denmark, is presented for the first time in Greece, in an exhibition that depicts his development through 29 selected works. Painter, sculptor, writer and poet Kirkeby is inspired by Byzantine art which he approached with his particular personal style.

The artist’s work incorporates influences from various currents of different periods, more or less classical (Renaissance, Cubism etc.), but mostly inspired by elements of the orthodox theology and Byzantine iconography.

The museum visitor will have the opportunity to detect and identify, the elements of Byzantine art that Kirkeby  depicts, unchanged or transformed, through three parts.

In the first part, six natural size sketches for stained glass are presented, created from 2004 to 2008 for the Gentofte church. Kirkeby drew these subjects based on the Old and New Testaments; the recurring motif of these sketches is the Tree (Tree of Life, of Knowledge) and the Mountain or the Rock.

The second part includes artworks revolving around three leitmotifs: the Tree, the Cross and the Wedges.
The tree appeared in Kirkeby work in the 1980, and since then plays a crucial role in his art, associated with life and death-as the Byzantine painters had to resort to symbols during the Iconoclasm, Kirkeby lets his trees stand forth as symbols of the Crucifixion, Death and Resurrection of Christ.

In the same part is presented a series of paintings with the subject: The Agony in the Garden [of Gethsemane].
In these works, the artist created a majestic, rocky landscape of  Byzantine inspiration where stands out a veined Beam between mountain ranges, and a Chalice against the colours of the sunrise, the ‘bitter cup’ that Christ had to drain.

The petrified world in these paintings testifies to Kirkeby’s (painter-geologist) fascination with mountains.

In the last part of the exhibition, the paintings depict Caves (or Grotto).
This motif takes a double function in the artist work, as a shelter and as a place of reflection.

This dual function is related with the symbolism involved in the caves of the Byzantine art, as plain or space with special significance (Cave-manger of Bethlehem in iconography of Birth, empty grave in the Crucifixion or underground cave for the kingdom of death, in the Resurrection).

The exhibition is curated by  Dr.Mikael Wivel, Danish art historian, who has a deep expertise on the artist’s work and published several important writings about it.

The exhibition is organized by the Danish Embassy in Athens under the auspices of the Danish Presidency of the European Union.