"Byzantine Salento. Through the camera of Foteini Kaimaki" 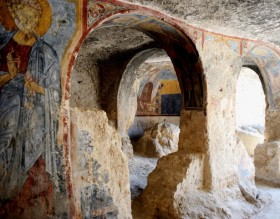 The Salento region in Southern Italy includes the province of Lecce and parts of the provinces of Brindisi and Taranto. The region was contested by the Lombards and Byzantines from 476, year of the fall of the Western Roman Empire, to 876, when it finally became a Byzantine holding. After the Norman conquest of 1071 the Byzantines left Salento. Byzantine culture and practices survived into the following centuries however, enduring in church fresco decorations up until the 14th c. and in the use  of the Greek liturgy until the 17th c.

Built Environment
Villages were the most common type of settlement, agriculture being the economy basis during the medieval period. Nucleated settlements are known in the Salento region from the 10th c., which further expansion and development taking place during 12th and 13th c. The first half of the 15th c. witnessed the abandonment of several villages and in their place the rise of tens of fortified settlements under the rule of feudal lords. This reorganization of the land arked the gradual transition from medieval villages to the small provincial towns of the early modern era (16th-17th c.).

Several villages were excavated directly into the soft rock of the area, which offered the advantages of ready-made construction material, defensible locations, and access to drinkable water. The morphology    of the territory in this rather dry region favoured collection of water   from rain deposits and water-bearing strata.

Churches, usually private ones, dominated the centre of these rural communities, providing Christian congregations with the wherewithal   to practice their faith.

Monastic Communities
Several monastic communities were founded in the Salento region between the 10th and 15th c. St Nicholas at Casole, St Mary at Cerrate, St Mauro and St Salvatore at Gallipoli functioned very early on as manuscript copying centres. St Nicholas at Casole and St Mary at Cerrate are mentioned as early as the 12th c. as active centres for the production of Greek manuscripts. The most significant period    for the production of codices in Salento was the late 13th to early 14th c.


My relationship with Southern Italy began in 1994, when I first  went to Calabria and Salento. It was love at first sight, with the land's civilisation the object of my desire....

With toil and passion I searched for cave churches and crypts in the gorges of Salento, and whenever I came against something new I felt like touching its history.

With lectures, national radio broadcasts, and the introduction of a group of my students to the poetry, the music and the local Grecanico language, I tried to make the culture of Southern Italy known in Greece. My relationship with Calabria and the many years of painstaking work in Salento also gave rise to the books Greek-Speaking Calabria in 2003 and Greece in Salento in 2008 (both in Greek). The photographs presented in this exhibition are only a small sample     of the culture of Salento from the 10th to the 15th c.