Architectural Treasures from the Heartland of the Medieval Serbian Kingdom 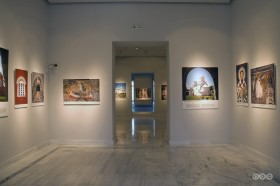 The photographic exhibition "Architectural Treasures from the Heartland of the Medieval Serbian Kingdom", organized by the Museum of Byzantine Culture (March 2012-December 2013), is now presented at the Byzantine and Christian Museum. Its photographic material will allow the visitor to get acquainted with the monuments of medieval Serbia ―a region deeply connected to Byzantium. After the visit, he will be able to experience in a more fulfilling way the archaeological exhibition "Art of Medieval Serbia", which the Byzantine and Christian Museum will inaugurate in the same hall the coming May.

The exhibition will present minor art and painting dating from the 11th-13th centuries as well as exact copies of wall paintings from Serbian monuments of the 13th and 14th century that are kept in the National Museum in Belgrade. The group of works, which for the first time will be displayed abroad, reflects the cultural level of the Serbian states of the Middle Byzantine Era, but also of the united, strong Serbian Nemanja state (from the late 12th c. onwards), as well as their close relationship with Byzantium which influenced their history for many centuries.
-------------------------------------------------------------------------------------------
The Museum of Byzantine Culture (MBC), in collaboration with the Institute for Cultural Heritage Preservation in Kraljevo (Zavod za Zaštitu Spomenika Kulture Kraljeva) participate in the action plan of the General Secretariat of Culture Thessaloniki - Cultural Crossroads with a photographic exhibition on the Architectural Treasures from the Heart of Medieval Serbia. The Cultural Crossroads for 2012 is hosting in Thessaloniki civilizations from the Balkans and Southeastern Europe, making Serbia the choice option for the Museum of Byzantine Culture.
The selection of the medieval kingdom of Serbia, linked with Byzantium and Thessaloniki in particular with multiple and multifaceted ties, stands out as being particularly meaningful. Selection of Central Serbia, area of activity of the Institute for Cultural Heritage Preservation in Kraljevo, presented an obvious choice since in this region very important ecclesiastical and secular monuments survive, attesting to the highest artistic, cultural and technological level of this region during the Late Byzantine era, when Serbia was ruled by the Nemanjić dynasty (1166 - 1371).
Contributors of the MBC's exhibition
Supervision and coordination
Dr Agathoniki Tsilipakou, Archaeologist
Director of the Museum of Byzantine culrure
Exhibitions curators
Dr Anastasios Antonaras, Archaeologist-Museologist
Gordana Gavrić, Archaeologist
Architectural design
Anastasia Karadimitriou
Christina Skandali
Photographs
Institute for Cultural Heritage Preservation Kraljevo
Translation
A. Ch. Antonaras
Technical support
Efrosini Theou, marble carver
Foteini baxevanou, museology student
George Boudalis, conservator
Vasileios Remvos, technician
Catalogue design and production
Ziti Publications
Digital ptinting
Whale Graphics