Image and Scripture. Greek Presence in Messina from the Middle Ages to Modernity 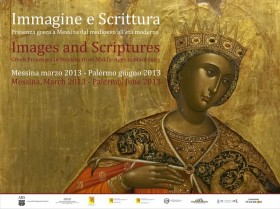 The exhibition deals with the Greek presence in Sicily from the Βyzantine era to the 19th century, focusing on the city of Messina, where a flourishing Greek Community existed. A number of Βyzantine and post-Βyzantine icons from the Communitys Church, Saint Nicholas of the Greeks, has been the starting point for the exhibition project. The icons were rescued from the ruins of the church by the crew of the Greek warship Sfakteria shortly after the big earthquake of the 28th of December 1908, which devastated the city of Messina. They were
immediately transferred to Athens, in safety, and a few years later, in June 1915, they entered the Collection of the newly founded (in November 1914) Byzantine & Christian Museum.
Forty-one of these icons are displayed in the exhibition, clearly revealing the influence of Byzantine art in Sicily, as well as the close relationships of the Greek Community of Messina with several Greek regions during the post-Byzantine period. The exhibition also includes nine icons bearing Byzantine influence, from the Regional Museum of Messina Maria Accascina Collection, as well as 16 manuscripts, some Byzantine in provenance (probably from Constantinople) and others of Byzantine influence, coming from the famous Monastery of San
Salvatore in Messina, which no longer exists. The manuscripts are now kept in the citys Biblioteca Regionale Giacomo Longo.
The exhibition is structured along four thematic units. In the first one a reference to Byzantine art in Sicily is made, by means of icons and manuscripts dating from the Byzantine era, namely from the mid-10th to the 15th century. The presence in Messina of several icons signed by or attributed to well-known post-Byzantine painters, obviously commissioned by members of the Greek Community of the city, is treated in the second exhibition unit. Icons painted by great Cretan masters, as Michael Damaskenos (2nd half of the 16th century), Viktor (2nd half of the 17th century) and Ioannes Μoskos (2nd half of the 17th century-early 18th century), as well as by artists coming from other Greek regions, i.e. Eustathios from Ioannina
(first decades of the 17th century) and Stylianos Devaris from Lefkas (second half of the 18th- early 19th century) are included in this unit. The third unit deals with the Greek Churches in Messina, by displaying a number of icons, the original place of which within a church is easily recognizable by the visitors (mainly icons from the various parts of the iconostasis, the structure separating the sanctuary from the nave). The forth unit makes a focus on the Greek Communitys development through the centuries, by presenting a large number of post-
Byzantine icons from the Byzantine & Christian Museum Collection and from the Museo Regionale Maria Accascina, together with post-Byzantine manuscripts from San Salvatore monastery. The exhibition ends with a reference to the big earthquake of 1908, the rescue of the icons from the ruins of St Nicholas of the Greeks and their entering the Byzantine & Christian Museum collection. Pictures of the devastated city of Messina, taken shortly after the earthquake, newspaper clippings from those days and a photo of the warship Sfakteria visualize the events of that period.
On the occasion of the exhibition, a number of remarkable post-Byzantine icons of the Byzantine & Christian Museum Collection have been conserved anew by the Museums conservators, with modern conservation techniques. Some of these icons were unknown so far, even to the scientific community. The conservation eventually ended up with impressive results, revealing older painting layers beneath the ones already known. At the same time, interesting conclusions have been drawn during the icons study, considering the activities of the Greek Community in Messina, mainly from the 16th to the 19th century, and their contacts
with certain Greek regions, some of them being under Venetian rule and some others under Turkish rule.
The exhibition is the outcome of a cooperation between the Byzantine & Christian Museum and Cultural Institutions and State Services of Sicily, and it is included within the framework of the Museums international collaborations for the promotion of Byzantine and post-Byzantine culture.
Exhibition Curators are Dr Anastasia Lazaridou, Byzantine & Christian Museums director, and Prof. Renata Lavagnini, Byzantinist and Neohellenist, professor at the Palermo University and Secretary General of the Istituto Siciliano di Studi Bizantini e Neoellenici Bruno Lavagnini.
The exhibition is accompanied by a catalogue, a luxurious edition of 400 pages, written in two languages, English and Italian. All the items on display are presented in it, many of them for the first time, since they were unpublished so far. Concerning the icons from the Byzantine & Christian Museum Collection, the results from the recent conservation and scientific research are presented and analyzed. Apart from the information on the exhibits, papers by prominent
Greek and Italian scientists are included, providing, for the first time, a composite overview of the Greek Communitys in Messina historical pathway. For these reasons, the exhibition katalogue makes an important contribution to the international bibliography. Scientific editor of the catalogue has been Prof. Renata Lavagnini.
The exhibition catalogue will be available for sale in the Byzantine & Christian Museum shop, at the price of 60.