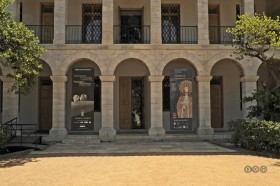 The Byzantine & Christian Museum, in collaboration with the National Museum of Belgrade, organizes the exhibition Serbian Μedieval Art. Τhe medieval culture of Serbia was permeated with West European and Byzantine influences. This Balkan state, Serbia, independent (from 1180 onwards) and powerful under the leadership of Nemanja Dynasty (1166-1371), stood always between the Byzantine world and the West. Its political, military, diplomatic and ecclesiastical relations with Byzantium and Europe determined not only its position into the Medieval world, but also its extravert cultural and artistic orientation. So, endowments were established in, or gifts made by Serbian rulers, nobles and church dignitaries to, Mount Athos, Thessaloniki, Constantinople, and the Holy Land, as well as to the West.
Notable objects, original and copies from the National Museum of Belgrade form an exhibition which is divided into four thematic units. On display are minor art objects (11th-14th c.), double-sided icons and Sanctuary doors and also wall-painting copies.  These copies reproduce wall-paintings from important medieval monuments of Serbia, i.e. from the monasteries of Μileševa, Sopoćani, Studenica, Gračanica and elsewhere, which reflect the values of the Byzantine artistic tradition.
These important items that will eventually be displayed in the New Permanent Exhibition of the National Museum of Belgrade, are presented in Greece as an ensemble for the first time, offering to the public the unique opportunity to come into touch with the medieval art of Serbia.