«Great Books of the Artists» published by Stratis Eleftheriadis (Teriade) 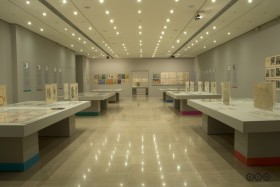 The Byzantine & Christian Museum exhibits 26 of the 27 «Great Books of the Artists» published by Stratis Eleftheriadis (Tériade) in Paris from 1943 to 1975. The Greek cosmopolitan chose to work with great artists, architects, painters and sculptors of the 20th century, by proposing them the creation of editions. He did not ask them to illustrate only, but to take care of everything: choose text, cover, fonts, printing techniques and paper type. So each edition is a complete work of art which bears clearly the artistic choices of its creator. Tériade contributed actively to this process; he often suggested or instructed to the artists texts for illustration or topics for writing, while at the same time he was seeking the suitable technical means for the consummation of a perfect edition.
The result vindicated him. In the framework of this pioneering publishing project, different artistic personalities delivered wonderful texts and splendid works of art that represent the major artistic movements of the 20th century.
---
The conservation of the Great Books
by Ioanna STEFANI - Conservator (BCM's Paper Objects Conservation Workshop)
At the beginning of November 2012 the conservation laboratory of manuscripts, printed material and paper objects of the Byzantine & Christian Museum received the Great Books of the artists and the Verve Magazines from the Museum-Library of Stratis Eleftheriadis-Tériade Collection, in order to conserve and prepare them for the new display.
The items were:
26 Great Books: 15 books (unfolded sheets, text and cover or case) and 1143 unfolded engravings
Verve Magazines: 20 copies and 547 sheets
In the items the following interventions have been made:
 Photographs taken before conservation
 Detachment of the engravings and of the sheets from unsuitable secondary support (cardboard or wood)
 Weakening of glue residues from the verso of the objects
 Mechanical cleaning
 Support or filling of losses (created by previous operations)
 Flattening of the engravings
▪ Mountings made by Japanese papers for the forthcoming exhibition
 Aesthetic restoration on the losses, when necessary
 Support of the covers and the boxes
 Classification of fragmented parts of Verve magazine (per issue)
 Placement of acid free sheets of paper between the engravings in order to create microclimate conditions and to secure the safe storage and transportation of the items.