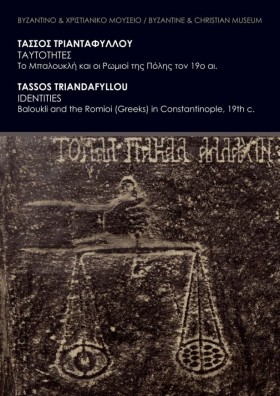 The exhibition is structured in two parts and, therefore, possesses artistic as well as archaeological interest. The artist Tassos Triandafyllou presents fifteen works (graphite on paper), in which he imprinted, during the summer of 2010, fifteen gravestones that today pave the courtyard of the Greek-Orthodox Monastery of Baloukli in Constantinople. Since the works created by Tassos Triandafyllou provide valuable information about the Community of the Romioi (Greeks) of the 19th-c. Constantinople, the Museum considered appropriate and interesting to present these works accompanied with relevant information and archaeological material from its Permanent Collections. In this way the contemporary creation is incorporated into the sociopolitical context of the 19th c.-Constantinople, and the exhibition acquires chronological, geographical, sociopolitical and artistic relevance.
The first exhibition unit refers to the Romioi that were the most strong, populous and active non Muslim minority in Constantinople. As the members of the Community thrived and held important professional and administrative positions, they were increasingly interested in the development of education and charity.
The second exhibition unit is dedicated to the Theotokos Zoodochos Pege Monastery (Baloukli) and to the Fountain (Hagiasma) of Baloukli where crowds of believers still flock. The same unit also refers to the Baloukli hospitals, impressively organized with clinics, nursing home, sanitarium and orphanage, where some of the best Greek physicians of Constantinople had served.
A last exhibition unit briefly refes to the funerary texts from Christian burials over the centuries in comparison with the information derived from the gravestones of Baloukli that are presented in the exhibition. The funerry inscriptions in Greek, Karamanli and Bulgarian, as well as the engraved marks that adorn the plaques, provide information on the place of origin, residence or /and work of the deceased, but mainly on their profession (that often is connected to their place of origin) and on the guilds in which they belonged.
The exhibition is enriched with the use of audiovisual media: apart from an audio excerpt from the book Loxantra by Maria Iordanidou that refers to the Baloukli Cemetery, the visitor can watch a video with the artist Tassos Triandafyllou while creating his works, and also three videos that were first presented in the 1st Istanbul Design Biennial (2012), and show the current reality of the Greek Community of Constantinople.
Additionally, in order to obtain a more complete impression of the artistic tradition of the flourishing Community of the Romioi in Constantinople from the 17th c. onwards, the visitor can also see Constantinopolitan artefacts that are presented in the permanent exhibition of the Byzantine Museum in the unit The Community of the Romioi.
Duration of the Exhibition: January 10-April, 27, 2014.
Parallel activities
● Guided tours by the curators Antonis Tsakalos or Ioanna Alexandri with the participation of the artist Tassos Trandafyllou and with artistic action (exerpts from the Novel Loxandra by Maria Iordanidou with the voice of Sophia Giannioti).
Curators of the exhibition
dr Antonis Tsakalos (archaeological part)
Ioanna Alexandri (artistic part)
Architectural Design
Spyros Nasainas